Press Release
Introducing to you Tonochrome, a fresh 5-piece London band who recently released their self-entitled debut EP, via ‘Rough Trade’ and ‘Bandcamp.’ Their music is best described as 21st century alternative rock.

Having only formed in September 2011 the band have progressed leaps and bounds. The EP which was recorded throughout a mild winter in Brooklyn, marked the beginning of the journey. On their return to London early 2012, they made a huge impression on the London gigging circuit, and managed to have the rest of the year fully booked up by summer.

Tonochrome’s EP hits somewhere like a lost gem from the mid 90s American underground and forward-thinking balladry. Their debut is immersed in contemporary soundscaping with a mix of electronic elements, truly organic rock riffs and odd meters, occasionally cavernous reverby production and some heartfelt, direct songwriting which is bolstered by the production flourishes. In collaboration with Norwegian artist Hedvig S. Thorkilsen, they created a unique series of silk prints, one used as the EP cover and another printed on an aluminum plate, cut into 16 pieces and packaged as a unique limited edition series of the EP. 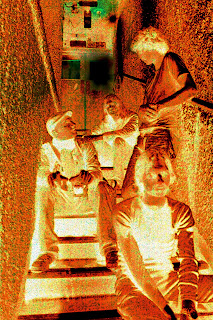